Lung screening can lead to a false diagnosis of lung cancer.

One of the risks of various screening tests that use radiation is cancer caused by the radiation itself. The other risk is that the screening may also find a change in healthy people that might never lead to a complaint, but once discovered, both the doctor and the patient feel that the problem must be treated. This is the case with mammography, isn’t it, but the situation is similar with lung screening.

In their book, Gilbert Welch and his colleagues reveal quite alarming facts as a side effect of lung screening (Welch et al., 2012). (Another book by Welch was published under the title “Should I Screen Myself for Cancer? Maybe Not, I’ll Tell You Why.”). 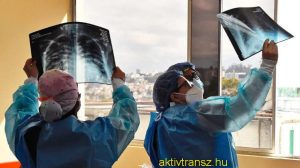 In the case of lung cancer, overdiagnosis is much more dangerous than, say, in the case of breast cancer. Not that an unnecessary mastectomy is pleasant, but it is much less lethal than removing part of a lung. However, for those diagnosed with lung cancer, surgery and other treatments are almost inevitable. This kind of treatment is also dangerous for smokers, because their lungs already work poorly anyway.

The situation is even worse in the case of lung lesions revealed by CT scanning, since these instruments (besides the fact that they can cause cancer, also detect much smaller lesions. (This is why the “development” of mammography is also dangerous, they detect smaller and smaller nodules, which can even be detected anyway they could be absorbed if they were not harmed).

In a 2001 study, 1000 CT scans detected 11.5 cases in smokers and 10.5 in non-smokers. In other words, there was almost no difference in the number of diagnosed cancers between smokers and non-smokers. At the same time, according to statistics, 3.35 out of 1000 smokers die in 5 years, while 0.2 among non-smokers die. i.e. the lung cancer mortality of smokers is 17 times higher, while the same number of people get lung cancer in the smoker and non-smoker groups based on the CT scan. It can be said that CT scanning suggests a fatal disease 17 times more often in non-smokers, and some of them unfortunately die from the treatments.

As a warning example, the authors cite the case of Brian Mulroney, who was Prime Minister of Canada between 1984 and 1993. Mulroney was perfectly healthy when a CT scan found two worrisome nodules in his lungs during his annual checkup. He was quickly operated on, but as a complication of the operation, he developed pancreatitis. He could only go home after a month and a half, but he was soon returned because a cyst had developed on his pancreas, which also had to be operated on. That meant another month in the hospital. The nodules removed from his lungs were found to be non-cancerous, meaning that Mulroney did not have lung cancer, and if they had not been examined, he could have saved himself several surgeries and months spent in the hospital.

The problem is twofold. Mass screening for many cancers, such as prostate, breast, thyroid or lung cancer, indicates a large number of cases that would never be true, causing symptoms. It is well known that prostate cancer can be detected in a good number of men over the age of 60, but these are localized lesions and never become invasive cancer. Until they get poked. The same is the case, as we have seen, with lung cancer. That’s one half of the problem. The other one is not so reassuring either, because the fact that someone smokes in itself only increases the risk of lung cancer, but the diagnosis can also be wrong, which is only confirmed by the fact that the person is a smoker. After that, it is difficult to decide who behaves more responsibly towards himself if he diligently attends screenings or if he does not. One thing is for sure: if the examination is justified because there is a serious suspicion of a lung problem, it is not a good idea to bury your head in the sand and refuse the examination. But even before the examination, you must be mentally prepared to be able to defend yourself against the danger of false diagnosis and overtreatment. In this situation, a person can be very alone in front of his doctors.

Screenings therefore always have winners (those who detected the change in time) and “losers” (those who were false alarms). Statistical tests, on the other hand, are important, because with their help we can see the error rate, on the basis of which the reliability of an individual finding can be evaluated. It is important to see that the matter is not black and white, but rather probabilities.